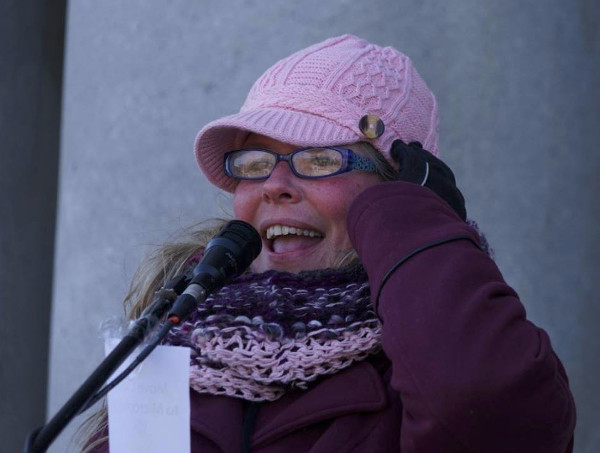 From Truth About Guns

It was a dedicated group that gathered at the capitol, with temperatures a few degrees above zero, and winds that gusted to over 40 mph. But they had much to celebrate. After years of difficult work, the state legislature had restored rights that had been severely infringed 60 years ago.

Man, it was downright FREEZING yesterday at the event on the State Capital building’s steps. Sunny, sure – but boy was that wind biting at 8 degrees! First time in my life I’ve been double and triple layered and still had to activate handwarmers in my deep winter mittens. And I wasn’t the only one. With all that, however, there was a hardy band of folks (larger than I thought, given the cold) that came out to celebrate the restoration of an unfettered Constitutional Right:

One local television station took note, though they got an important detail wrong. The bill did not repeal the state concealed carry permit system. It simply removed the requirement to have a permit, if you enjoyed the constitutional right to own a firearm.  According to the report, dozens attended the event in the frigid weather.

Legislative Director of Women’s Defense League of NH Susan Olsen took to the mic to welcome everyone to the 3rd Annual Gun Rights Rally at the State House Saturday.

One by one advocates of the second amendment were called up to the mic. They each told a different story, all with the same point — the right to carry is a constitutional right, and they were proud to point out that New Hampshire is one of 15 states to honor that.

One advocate, Evan Nappen entered the stage with his face covered in a ski mask and a skull represented as his face and said, “today I am the ghost of gun laws past.”

“You know, it’s a cold, cold day here today, very cold,” he said. “But you know what folks? The sun is shining on the golden dome above us. It is shining bright. I was driving up today and saw that sunshine shining off of that and it made me smile. Because we did it. And we did it together. This horrible gun law was just a time bomb ticking to be further used and abused against all of our rights.”

New Hampshire has now joined with 11 other states in the permitless or constitutional carry club. Those states, for the most part, have restored carry laws to what they were was when the Bill of Rights was ratified in 1791. No permit was required to carry weapons then, either openly or concealed. The first laws against concealed carry in the United States were not passed or considered valid until four decades later.

A dozen or more states have constitutional carry bills either introduced, or in legislative play. The dedication shown by the Women’s Defense League of New Hampshire is enough to chill any opponents of the right to bear arms.

©2017 by Dean Weingarten: Permission to share is granted when this notice and link are included.