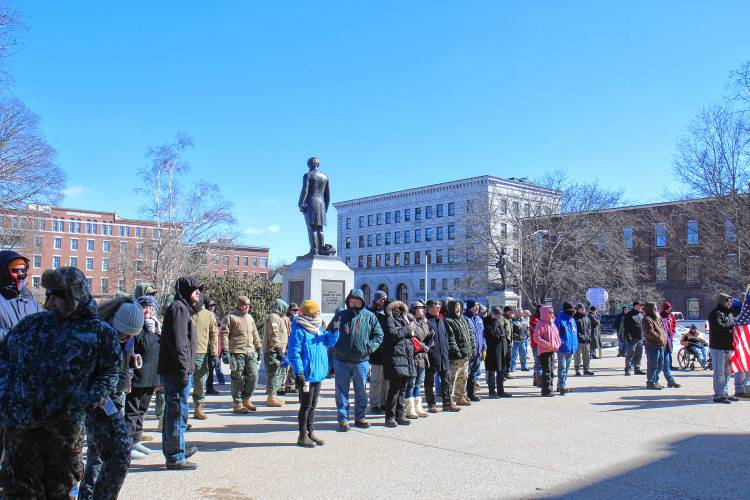 From the Concord Monitor

Gun rights activists gathered on the steps of the State House lawn Saturday to cheer a long-sought legislative victory – and to warn they would remain vigilant of any efforts to restrict gun use and ownership.

“In years past you’ll remember that we groused a bit and felt sorry for one another a bit but today is a day of celebration,” Susan Olsen, the legislative director for the Women’s Defense League of New Hampshire told the crowd.

About a hundred turned out for the event, including several lawmakers, despite the day’s frigid temperatures. And for Olsen, the turnout was evidence of just how tough the gun rights movement in the Granite State is.

“What is that great meme on the internet? Americans, yes, we will cross a frozen river on Christmas Eve and kill you in your sleep. Cold weather doesn’t bother us here in New Hampshire,” Olsen said.

With Senate Bill 12 signed into law late last month, it’s now legal in the state to carry a loaded, concealed weapon without a license. But despite of the passage of the so-called ‘constitutional carry’ bill, speakers at the rally warned the crowd that gun control efforts would return.

Rep. John Burt, a Goffstown Republican instrumental in the passage of SB 12, noted just a few bills – including one, introduced by Rep. Katherine Rogers, a Concord Democrat, to require background checks to purchase a gun.

Rogers had recently asked him jokingly, Burt recalled, when he would kill the bill she’d introduced in committee.

Burt announced he had started the first Second Amendment caucus for the New Hampshire House. The caucus will bring lawmakers together advocating against gun control measures.

Their website, nhhouse2acaucus.org, he told the crowd, will track legislation and grade legislators for their votes on gun related bills.

Manchester Republican Rep. Lisa Freeman came to the event with her husband, Neil Freeman. He said they came out because “we’re talkng about freedom.”